Conversion therapy is a discredited counseling practice by which therapists and other health care providers seek to change a person's sexual orientation, gender identity, or gender expression through aversion treatment. The practice repeatedly been shown to harm LGBTQ+ youth. 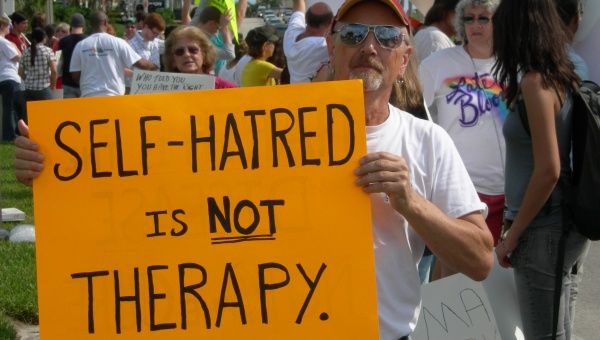 We can not allow this barbaric practice to continue in Florida -- or anywhere else.

PBCHRC shared the model ordinance with Alachua and Broward Counties, as well as the City of Tampa, all of which enacted virtually identical ordinances banning conversion therapy.

Immediately after the ban took effect, Liberty Counsel, an anti-LGBTQ hate group, filed suit in federal court on behalf of two therapists seeking to nullify the bans on conversion therapy for minors enacted by Palm Beach County and the City of Boca Raton. The plaintiffs argued that they should be allowed to continue to practice conversion therapy.

In 2019, Judge Robin Rosenberg of the U.S. District Court for the Southern District of Florida denied Liberty Counsel's motion for preliminary injunctions. As a result, young LGBTQ+ people in Palm Beach County remain safe from the psychological abuse caused by conversion therapy.

Having lost, Liberty Counsel has appealed the order to the U.S. District Court of Appeal for the Eleventh Circuit. Briefs were filed and oral argument was held in February. We expect the appellate court ruling in the near future.

As mentioned above, the City of Tampa enacted a conversion therapy ban utlizing the PBCHRC model on April 6, 2017. Liberty Counsel immediately filed suit to nullify the ban. Unfortunately for LGBTQ+ youth, this time Liberty Counsel prevailed. Judge William Jung of the U.S. District Court for the Middle District of Florida struck down the ban, making it legal for conversion therapy practitioners in Tampa to once again "treat" LGBTQ+ children with their quackery.

The City of Tampa appealed the ruling to the U.S. District Court of Appeals for the Eleventh Circuit. Although briefs have been filed, no date has been set for oral argument.  Therefore, a decision is no expected until later this year or early next year.

The event will be held at 7:00 p.m. the evening after the appellate court decision is announced. NEAT's presenters will provide their analysis of the court's ruling. Since the court does not give notice when it issues decisions, specific details about the Town Hall will be sent out immediately following the ruling.

Interestingly, the panel of presenters does not include any of the attorneys who co-wrote the ordinances being challenged in court. Nor does the panel include any of the attorneys who argued the cases at the before Judge Rosenberg or the three judge panel of the Eleventh Circuit. Most significantly, none of the boots-on-the-ground activists involved in organzing to get the conversion therapy bans at issue enacted were invited to be on the panel. Still, the Virtual Town Hall may provide an interesting perspective on the future of conversion therapy ban across the country.

Click here to RSVP
to attend the Virtual Town Hall.

Co-Sponsors of the Virtual Town Hall