Rep. Alcee Hastings (D-Fla.) on Thursday told President Barack Obama that he is “deeply disappointed” that the president still hasn’t repealed the “don’t ask, don’t tell” policy that bans gays and lesbians from openly serving in the military.

Hastings penned a letter to the president reminding him that he and 76 other House Members had already asked him to halt investigations under “don’t ask, don’t tell” aimed at discharging service members who are openly gay. In addition, the lawmakers asked Obama to work with Congress to come up with a new policy that doesn’t discriminate based on sexual orientation.

“More than two months later, I have yet to receive an official response,” said Hastings.

The Florida Democrat notes that the administration has requested another 17,000 troops for Afghanistan and warns that the military can’t afford to lose more soldiers to the 1993 policy, which he argued results in the loss of two service members per day.

“While I commend Secretary [Robert] Gates and the Pentagon’s general counsel for their continued efforts to identify possible provisional measures, you can take action right now. I sincerely hope that your administration will make ‘don’t ask, don’t tell’ a priority and do everything in its power to repeal this ridiculous, bigoted law once and for all,” says Hastings.

The ACLU's challenge to Florida's ban on adoption by gay parents

Martin Gill and his partner of more than eight years have been raising two foster children of the state since 2004. When they arrived, the infant and his four-year-old brother had clearly suffered from neglect. In 2006, a judge terminated the parental rights of the biological parents. Meanwhile, the children have thrived in their new home and are closely bonded to their foster parents and their other brother (Gill’s partner’s biological son, who the two men are also raising). 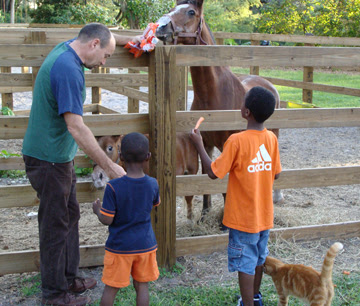 Martin Gill with the two brothers he hopes to adopt in Florida.

Today the boys, now four and eight years old, have many friends in their North Miami neighborhood, are doing well in school, and are close with the couple’s extended family, which includes two doting grandmothers.A psychologist who evaluated the boys recommended that it would be in the boys’ best interest to be adopted by Gill, testifying that it would be devastating for the boys to remove them from the home.

So that he can adopt the children, Gill is being represented by the ACLU in a challenge to the constitutionality of Florida’s law that automatically bans adoption by gay people.

The case is pending before the Third District Court of Appeals, which will hear oral argument on August 26, 2009.

Being LGBT shouldn't be a job hazard

In a historic first, the U.S. Senate has introduced an inclusive Employment Non-Discrimination Act (ENDA).

Once passed, this long overdue ENDA will protect gay, lesbian, bisexual, and transgender citizens from discrimination in the workplace. Write to Senator Nelson now and insist that he support all members of our community by supporting this bill.

“The promise of America will never be fulfilled as long as justice is denied to even one among us. The Employment Non-Discrimination Act brings us closer to fulfilling that promise for gay, lesbian, bisexual, and transgender citizens. I’m proud to join Senators Merkley and Collins in introducing this important legislation.”
--Senator Kennedy

Read more about ENDA and what it means for you.

Re: Executive Order on Equal Opportunity in State Employment

At the 2008 Republican Governor’s’ Association conference, you told your colleagues that “there are a lot of issues people care about deeply that affect their lives in a real way every single day,” reminding them that “the people of our states have entrusted us to do what is right – not just for the benefit of Republicans but for all the people we serve.” You further advised your colleagues that “embracing cultures and lifestyles will make us a better party and better leaders.”

As Governor, you are empowered to take a simple step to set an example by issuing an executive order to assure all Floridians that our state is committed to providing equal employment opportunity in state employment to all qualified individuals regardless of personal characteristics such as race, color, religion, sex, national origin, age, disability, sexual orientation, gender identity or expression, pregnancy, familial status, or marital status. (In light of the decision in Carsillo v. City of Lake Worth, 33 Fla. L. Weekly D2154 (Fla. 4th DCA Sept. 10, 2008), we have added “pregnancy” to the lis t of protected classes.)

Once again, the Board of Directors of the Palm Beach County Human Rights Council is requesting that you issue an such an Executive Order.

As always, should you or your staff have any questions, please feel free to contact me directly.

RH:r
enclosure
copies w/out enclosure to: Board of Directors, PBCHRC
Senator Ted Deutch
Posted by Rand Hoch at 7:05 AM 1 comment:

JACKSONVILLE, Fla. – The American Civil Liberties Union of Florida has reached a partial settlement with the School Board of Nassau County in a lawsuit filed against the school district earlier this year challenging the district’s refusal to permit Yulee High’s Gay-Straight Alliance (GSA) to meet on campus.

Pursuant to the terms of the agreement, approved by federal judge Henry Lee Adams, Jr. this past Friday, a permanent injunction has been entered against the district prohibiting discrimination against the high school’s GSA and forbidding retaliation against students and faculty who are associated with the GSA. The school district will also pay about $40,000 in attorneys’ fees and court costs associated with the litigation thus far to the ACLU.

The lawsuit was filed on February 10, 2009 after Yulee High School administrators repeatedly denied student requests for permission to form a GSA and to hold meetings at the high school, and previously at Yulee Middle School in the 2007-2008 school year. On March 11, 2009, Judge Adams entered a preliminary injunction ordering the school district to allow the GSA to meet at Yulee High School while the case made its way through the courts. The settlement agreement makes permanent the terms of that preliminary injunction.

The ACLU of Florida’s LGBT Advocacy Project and the ACLU’s national Lesbian, Gay, Bisexual and Transgender Project recently won a similar lawsuit in Okeechobee, Florida, where a federal judge ruled for the first time that school administrators must provide for the well-being of LGBT students, and that forming a GSA was a good way to accomplish that goal.

“Every student deserves a safe and secure education. Bullying of gay students is epidemic in American schools and in Nassau County,” said Robert Rosenwald, ACLU of Florida LGBT Advocacy Project Director and lead counsel. “These courageous students took a stand to address the problem and the school policies that exacerbate it. Hopefully, Nassau school administrators will follow their students’ example and become part of the solution rather than part of the problem.”

The judge’s order outlines what the school must do to comply, including:

“We started a gay-straight alliance because we wanted a safe space where all students can talk about harassment and discrimination that LGBT students face,” said ACLU plaintiff and Yulee student Hannah Page. “We’re grateful that the court recognized that the GSA should be allowed to meet and be treated like any other club.”

Download a PDF of the original Complaint here: http://www.aclufl.org/pdfs/YuleeComplaint.pdf

Students can learn more about their rights by downloading a free copy of the ACLU of Florida’s Student Rights Handbook at: www.aclufl.org.

About the ACLU of Florida’s LGBT Advocacy Project

The ACLU of Florida is freedom's watchdog, working daily in the courts, legislatures and communities to defend individual rights and personal freedoms guaranteed by the Constitution and the Bill of Rights. For additional information, visit our web site at: www.aclufl.org.

The ACLU of Florida’s LGBT Advocacy Project has worked since 2005 to protect the legal rights of Florida’s LGBT community and is the leading organization protecting gay kids from discrimination and harassment. For additional information, visit our web site at: www.aclufl.org/lgbt

The National Center for Lesbian Rights (NCLR) has published a manual to help lesbian, gay, bisexual, and transgender (LGBT) elders and their families and caregivers navigate legal issues.

The Center estimates that there are between 3.5 and 4 million LGBT persons age 65 and older in the U.S. Many of these individuals confront institutions and public policies that do not recognize their needs or acknowledge their families, or that discriminate against them based on their sexual orientation or gender identity or expression.

Planning with Purpose: Legal Basics for LGBT Elders provides basic information about areas of the law that are important to LGBT elders, especially individuals and couples who are age 55 and over, based on NCLRs experience advocating for LGBT elders. The guide includes information on relationship recognition, finances, health care, long-term care, planning for the care of minor or disabled children, inheritance, elder abuse, and discrimination against LGBT elders. It covers many areas where rights, benefits, and protections are generally provided to heterosexual people based on spousal status, but are denied to same-sex couples, even if married or in other legal unions. It also highlights issues unique to transgender elders.

The manual states that its purpose "is to give you some legal information, and to help you think about 'planning with purpose' and how to best protect yourself within a legal system that does not yet provide equality to everyone."

The NCLR is a national non-profit, public interest legal organization committed to advancing the civil and human rights of LGBT people and their families through litigation, public policy advocacy, and education.The NCLRs Elder Law Project has been in existence since 1999. To visit the NCLR's Elder Law Project page click here.

For an article on the NCLR's Elder Law Project, click here.