Twenty-five cities and counties from across the nation have joined in an amicus brief filed by the City of Miami in support of the City of Boca Raton and Palm Beach County's efforts to obtain a rehearing of a ruling by a three-judge panel of the U.S. Court of Appeals for the Eleventh Circuit regarding the legality of ordinances enacted ito ban conversion therapy for minors.

The appellate panel was expected to rule only on one narrow legal issue: Whether preliminary injunctions sought by two conversion therapy practitioers were properly denied by Judge Robin Rosenberg of the U.S. District Court for the Southenn District of Florida.
The therapists sought the preliminary injunctions hoping to continue practicing conversion therapy on children pending a full trial on broader issue of whether local goverments could legally enact conversion therapy bans.
On November 20, 2020, the panel ruled 2-1 in favor of the therapists, directing Rosenberg to issue the preliminary injunctions prohibiting Boca Raton and Palm Beach County from enforcing their ordinances. However, the panel also ruled the ordinances were unconstitutional, based on First Amendment grounds.
"Two recently appointed appellate court judges ignored legal precedent, as well as extensive evidence that conversion therapy causes harm to LGBTQ children,” said Rand Hoch, PBCHRC's President and Founder. "As a result of this erroneous ruling, LGBTQ youth in Florida once again can be subjected to the psychological abuse caused by conversion therapy."
PBCHRC is Florida’s oldest, independent, non-partisan, political organization dedicated to ending discrimination based on sexual orientation and gender identity or expression. Over the years, PBCHRC has been responsible for the implementation of more than 150 laws and policies providing equal protections, rights, and benefits for the LGBTQ community.
Hoch, who served as Florida’s first openly LGBTQ judge, was one of the attorneys who drafted the ordinances.
In light of the adverse ruling, PBCHRC requested the City of Boca Raton and Palm Beach County to seek a rehearing by all twelve judges on the appellate court.
On Decemebr 11, 2020, the city and county filed a Joint Petition for Rehearing, taking the position that the panel's majority opinion ignored legal precedent, overlooked or misapprehended points of law, and deprived them of the their day in court to present additional evidence.
In support of the petition, on December 18, 2020 the City of Miami filed an amicus brief. Jurisdictions which have signed on to the amicus brief include Alachua County, Florida; Bay Harbor Islands, Florida; Boynton Beach,Florida; Broward County, Florida; Covington, Kentucky; Cudahy, Wisconsin; Cutler Bay,Florida; Delray Beach, Florida; Duluth, Minnesota; East Lansing, Michigan; Fort Lauderdale, Florida; Gainesville, Florida;; Greenacres, Florida; Kent, Ohio; Lake Worth Beach, Florida; Miami Beach, Florida; North Bay Village, Florida; North Miami, Florida; Oakland Park, Florida; Pima County, Arizona; Riviera Beach, Florida; St. Louis, Missouri; St. Paul, Minnesota; South Miami, Florida; Tallahassee, Florida; West Palm Beach, Florida; and Wilton Manors, Florida;
A second amicus brief in support of the City of Boca Raton and Palm Beach County was filed by the Florida Psychological Association and the Florida Chapter of the American Academy of Pediatrics. In addition, a third amicus brief was filed by the Trevor Project, the American Foundation for Suicide Prevention, and the American Association of Suicidology.
Posted by Rand Hoch at 12:54 PM No comments: Boca Raton and Palm Beach County filed a petition with the Eleventh Circuit Court of Appeals Friday asking the court to review a November ruling where a three-judge panel found their bans on conversion therapy for minors unconstitutional.

It was uncertain if the county and city were going to challenge the ruling.

The petition is calling for an en banc review, which means all 12 judges would hear the case. The petition also states that the majority opinion overturning the bans “conflicts with circuit precedent” and its interpretation of “strict scrutiny” departs “from the U.S. Supreme Court.”

“The decision, possibly unintentionally, included language suggesting it constituted a final decision on the merits, even though the Court was merely reviewing the denial of a preliminary injunction; the Governments are entitled to their day in court to present additional evidence,” the petition reads.

According to Rand Hoch, the president of the Palm Beach County Human Rights Council, the judges in the majority should never have ruled on the merits in this case until a trial was held.

“Two recently appointed appellate court judges ignored legal precedent, as well as extensive evidence that conversion therapy causes harm to LGBTQ children,” said Hoch in a prepared statement. "As a result of this erroneous ruling, LGBTQ youth in Florida once again can be subjected to the psychological abuse caused by conversion therapy."

The controversial practice known as conversion therapy has been discredited by most professional medical associations and 20 states, and more than 80 counties and municipalities in the U.S. have enacted laws prohibiting the practice on minors.

The initial challenge to the laws in Palm Beach County and Boca Raton were brought by well-known local anti-LGBT therapists Robert Otto and Julie Hamilton.

"Today's petition was filed in the hope that all 12 judges on the Eleventh Circuit will reverse the panel’s decision," said Hoch. “If the panel’s ruling is allowed to stand, all conversion therapy bans in Florida will be struck down. Moreover municipalities in Florida, Alabama and Georgia could be prohibited from enacting laws to provide protection against conversion therapy.” 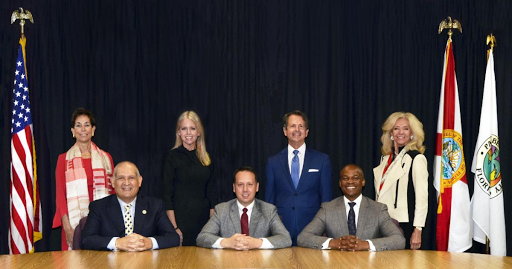 Palm Beach County Commission
Posted by Rand Hoch at 9:02 AM No comments:

The City of West Palm Beach has again earned a perfect score on Human Rights Campaign Foundation Municipal Equality Index (MEI) ranking of cities across the United States. Nationally, 94 cities earned perfect scores.
The MEI examines how inclusive municipal laws, policies and services are of the LGBTQ people who live and work there. Cities are rated based on non-discrimination laws, the municipality as an employer, municipal services, law enforcement, and city leadership's public position on equality. The 2020 MEI is the ninth annual edition and rates more than 506 cities on 49 different criteria from every state in the nation.