The case of the man who defaced Delray Beach’s pride intersection this summer will be going to trial on February 11, 2022.

“We want to resolve this case,” Dijols told the judge.

Jerich is accused of burning out his truck over the intersection during a birthday celebration caravan for former President Donald Trump just days after the intersection was dedicated. A video was posted to social media of the burnout, and a witness from the caravan came forward to report the incident to the Delray Beach Police Department. 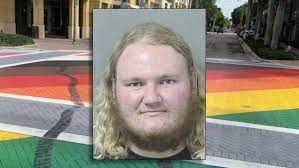 Jerich was arrested on June 17 and charged with criminal mischief over $1,000, reckless driving and evidence of prejudice (felony enhancement). However, in August, Palm Beach County State Attorney Dave Aronberg dropped the hate crime charge. He explained in a press conference that the case did not meet one of the requirements of the law to move forward with a hate crime — he explained that the victim was from the city of Delray Beach, which does not have a sexual orientation or gender identity. The office also looked into charging Jerich under Florida Gov. Ron DeSantis’ new Combating Public Disorder statute, but Aronberg said that the case did not meet the requirement of the memorial honoring or recounting “the past or public service of a Florida or United States resident.”

“I was hoping it would go to trial simply because we live in a system where that is the fairest way to go,” said Rand Hoch, the president and founder of the Palm Beach County Human Rights Council.

Richard Clausi, the deputy chief of the misdemeanor division with the Palm Beach County State Attorney's Office, was not present at the plea conference due to a scheduling conflict.

Hoch called Clausi an “A-plus attorney” and said that he does “very well in trial.”

Dijols told the judge that the office wanted Jerich to serve six months in jail “even though Mr. Jerich has no priors” and that his client was willing to pay restitution. Suskauer said the jail time was “not acceptable” and asked, “It’s not a complicated case, right?”

“I’m surprised that the judge doesn’t understand the severity of the impact on what this man did to the LGBTQ community,” Hoch said. “But then that’s why you have a trial, so he can understand the impact more fully … Now I guess it’s up to a jury to determine should this man be let go with a slap on the wrist or should he be held accountable for what he did.”

Jerich waived his right to a speedy trial and the groups agreed on February for the trial date.