Ethan Kennedy has been selected as the inaugural recipient of the Daniel S. Hall Social Justice Award by the Palm Beach County Human Rights Council.  Kennedy is a senior at Oxbridge Academy and lives in Wellington, Florida. 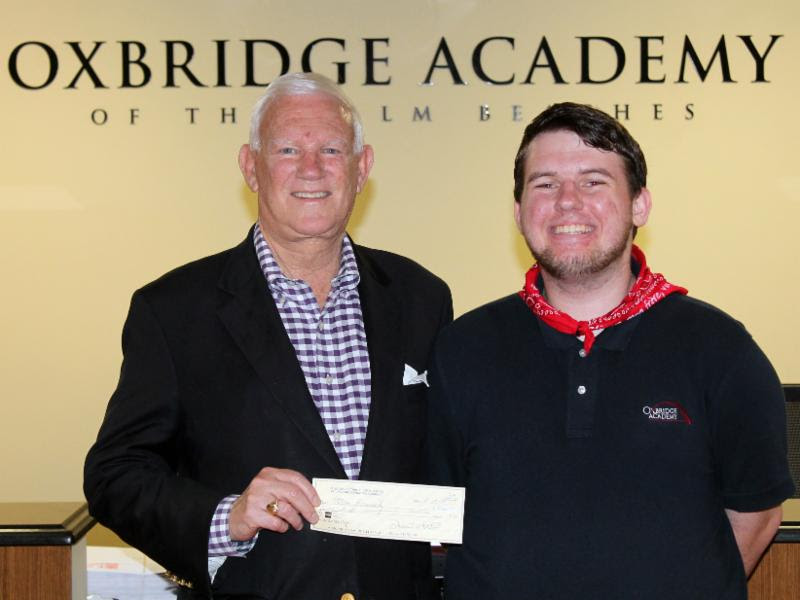 PBCHRC Treasurer Dan Hall and Ethan Kennedy
Kennedy is the founder and current president of Oxford Academy's Gay-Straight Alliance (GSA).  Over the years, he has demonstrated his commitment to advocacy and his ability to be an effective organizer.  As a participant of Creating Change 2014, the nation's largest gathering of activists, organizers, and leaders in the lesbian, gay, bisexual, transgender and questioning (LGBTQ) community, he was able to put his leadership skills into action.  Making the most of this experience, he set off to create a safe and accepting environment for LGBTQ students by working closely with the faculty and staff at his school.

He is also responsible for implementing the school's participation in the National Day of Silence, a day of action in which students vow to take a form of silence to call attention to the silencing effect of anti-LGBTQ bullying and harassment in schools.

The Social Justice Award is named after Daniel S. Hall, a local attorney who manages a financial counseling company.  Hall has served as the Treasurer of the Palm Beach County Human Rights Council since 1990 and is its longest serving board member.  As a father of three, an activist, and a mentor of gay youth, Hall has always had a strong interest in education. The Palm Beach County Human Rights Council, a local nonprofit organization dedicated to ending discrimination based on sexual orientation, gender identity and gender expression, awards the annual scholarship to local college bound high school seniors who have demonstrated  an interest in advocacy on behalf of the LGBTQ community.

"Ethan exemplifies the new generation of LGBTQ activists, who will help bring our nation together on our issues which, unfortunately, divide America today," said Hall.  "The Palm Beach County Human Rights Council is proud to be able to help him pursue a college degree."

"I am honored to be receiving this scholarship. I plan on continuing my activism work for the LGBTQ community in the following years, and winning this scholarship has given me the confidence that I'm on the right track to making a difference," said Kennedy. "I cannot thank my mom and family enough for supporting me as I enter the next chapter of my life."

Kennedy will be attending New College of Florida where he plans to study Political Science and Women's/Gender Studies
Posted by Rand Hoch at 5:54 AM No comments: